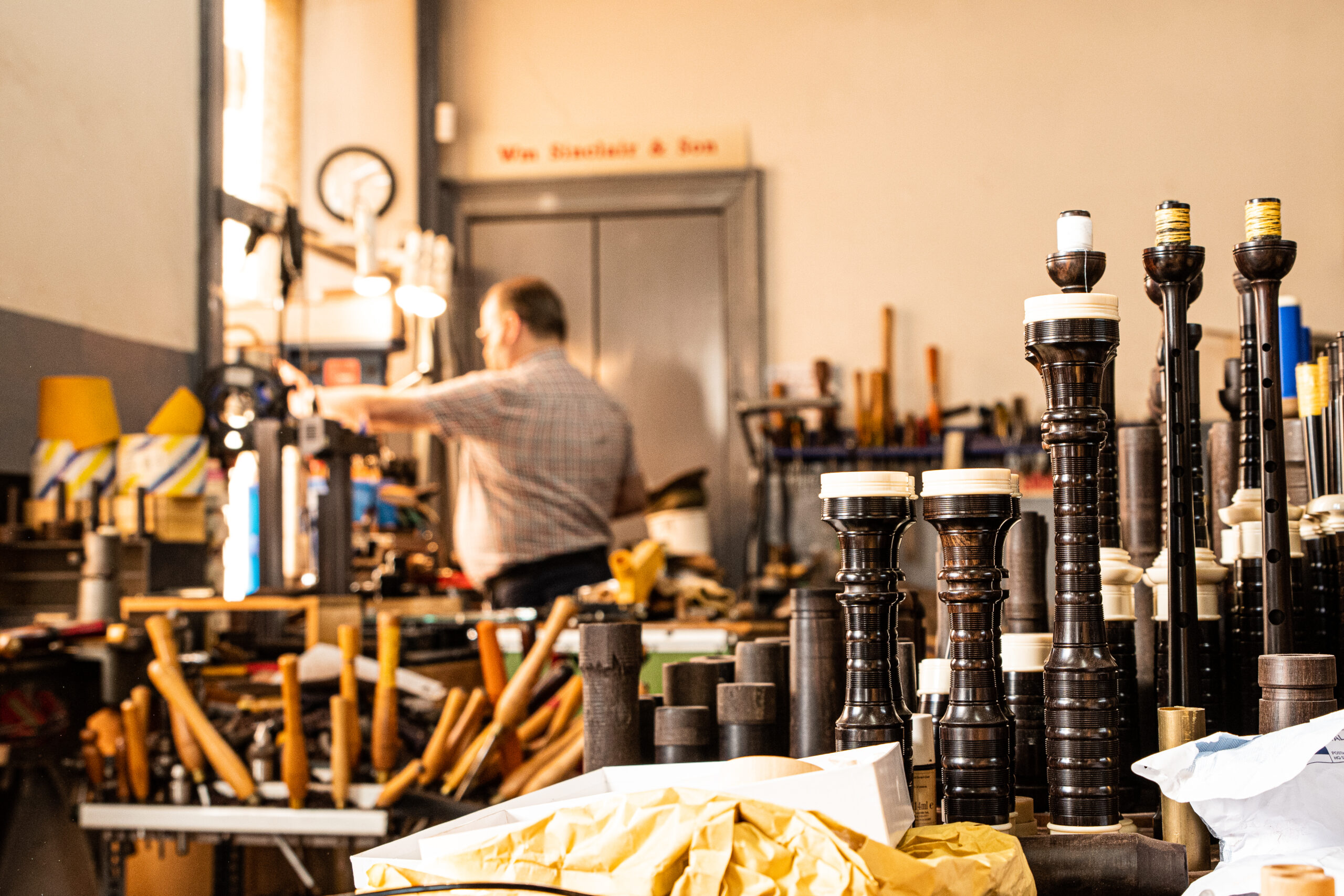 It is a far cry from the old days of the foot-treadle lathe to the era of modern machinery.

The success of the bagpipes manufactured by SINCLAIR of LEITH is due to the character and adaptability of these craftsmen who have come up the hard way. The good old Scottish character prevails over obstacles and adversities — strong hearted with sincere faith in the Creator of all things good, mark well their motto “Commit Thy Works To God.”

It was Sandy who made the first set of pipes for William Snr. on the foot-treadle lathe. Operated by the pedal power of William Snr. — Hard work, indeed, and with a lump of lead on the flywheel — once going, the “power” had trouble keeping on the treadle.

The business was pionerred by Alexander, or Sandy, Sinclair expressing that ruggedness of character and determination and portraying the amazing genius of those Men of the North, to create and make with their own hands that which they could not buy.

Sandy also made reeds, although some were supplied in the early days by William Rutherford (a Boiler Fireman in the Bonnington Sugary) and John Dixon, that Don of Reed Makers widely acknowledged as one of the finest by the old school. From the John Dixon Reed came the famous SINCLAIR REED.

The SINCLAIRS then were all corrie handed (or right-shouldered) players. William Snr. (a self taught musician) started on the chanter at the age of 5 and made his first public appearance when 7 years old. For a time the piano superseded the pipes and this was a great help, providing an opportunity to further enlarge his musical repertoire. However, the pipes were his great love.

Although self taught, opportunity to listen to various pupils of Sandy Sinclair at the house was of assistance, and the pupils co-operated by allowing ‘young Willie’ to play the full size pipes at the Seafield Road, unknown to Sandy — boys will be boys!.

William Snr. and brother Donald played a unique duet on the practice chanter — one would blow and play the top hand, while the other played the lower hand.

William Snr. was Pipe Major of the Leith Celtic Pipe Band, the Broxburn Pipe Band and the 5th Volunteer Edinburgh Rifles, all at the same time one year. Further to this he was Pipe Major of the Dr. Kelso Pipe Band, winning a prize at Cowal — the games he attended for half a Century. He was also connected with the Boys Brigade in Edinburgh, from their earliest days, as Pipe Major and even at age 75 taught the boys. His success with Pipe Bands was well established.

William Snr. was a Stone Hewer to trade and during the stone masons strike of 16 weeks, when no dole or money was available, started making reeds in order to support his family. The reeds were all fashioned by hand with even the tools being hand-made.

At this time William Jnr. was just a nipper and after the 1914-18 war he served his time as a Joiner — the Sinclair lads, from School days on, have been interested in tools and mechanics and did some invaluable experimenting on their own. Slack trade influenced William Jnr. going into the making of reeds, as well as sewing pipe bags. With the 1926 strike, and having been familiar with a chanter since he was 1 year old, William Jnr. left the building trade and entered the employment of James Robertson (Bagpipe Maker) in Grove Street (http://nms.scran.ac.uk/database/record.php?usi=000-000-579-546-C), Edinburgh and served his time there. As well as a qualified Joiner, William Jnr. was mechanically gifted and has been responsible for making special tools and improvements to various machines.

So from the humble start of Sandy Sinclair making bagpipes on a foot lathe at home, the firm has supplied most of the prize winning Pipe Bands at home and abroad from its factory at 1 Madeira Street.